NASA is planning to conduct a non-time critical removal action (NTCRA) to address unacceptable risks associated with landfill waste at the CDL. Solid waste is present near the surface and extends to a depth of 13 feet in some areas. Action is necessary to address the potential for direct contact with exposed landfill wastes by human and ecological receptors.

NASA developed an Engineering Evaluation and Cost Analysis (EE/CA) to evaluate alternatives for the NTCRA and selected excavation and off-site disposal of waste and affected soil as the preferred alternative. Contaminants in groundwater, surface water, and sediment will be addressed in a future Feasibility Study.

NASA anticipates beginning NTCRA excavation activities in January/February 2023, with field components completed over a four-month period. The project schedule will be adjusted as necessary throughout the project. The waste and contaminated soil will be removed utilizing conventional construction and excavation techniques and will be transported to the Accomack County Landfill (see Site Poster). Approximately 7,450 cubic yards of construction debris and approximately 8,065 cubic yards of soil are estimated for excavation and disposal. The excavated areas will be backfilled with clean fill and topsoil, and will be seeded to minimize the potential for erosion.

NASA encourages the public to review the EE/CA and associated technical documents below to gain a more comprehensive understanding of activities that have been conducted at the CDL.NASA accepted comments on the EE/CA during a 30-day public comment period from October 28, 2022 to November 27, 2022.

For any questions regarding Operable Unit 07, or NASA WFF's Restoration Program, please contact:

History of the Construction Debris Landfill

The Department of Defense (DoD) established the Chincoteague Naval Auxiliary Air Station (CNAAS) in 1943 at the current Main Base portion of NASA's Wallops Flight Facility (WFF) to establish a training facility for World War II naval aviators. The Navy built three runways, several buildings and supporting infrastructure in the early 1940s. The original runways and buildings have been modified and extended, as needed, to accommodate the evolving mission of the facility. Accordingly, the WFF property has experienced periods of construction and demolition of runways, buildings, and roadways. Analysis of historical aerial photographs document a series of ground scars indicative of waste disposal in areas at the northeast corner of WFF that are visible in 1949, 1954, 1959, and 1963 aerial photographs. By 1963, some of these features are no longer visible. By 1974, none of them remained visible. Investigations described below confirmed that the area had been used for disposal of construction debris and ash. 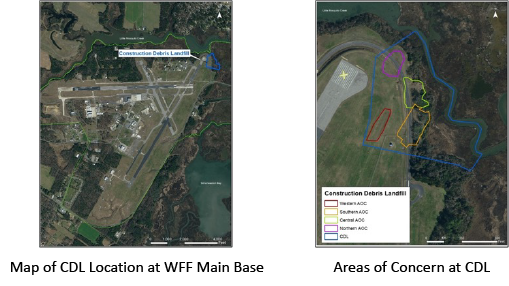 The CDL site was discovered in 2000, when the United States Army Topographic Engineering Center produced a historical analysis report of area ground scars, disturbances, channels, and other activities at WFF dating back to before the United States involvement in World War II. Based on the aerial photographic analysis, four Areas of Concern (AOCs) within the CDL were defined and named with respect to their geographic position to each other: Northern, Central, Southern, and Western AOCs.

In 2015, NASA and the DoD, through the Department of the Army, signed a Memorandum of Agreement (MOA) to transfer funds from DoD to NASA to conduct necessary response actions under the Comprehensive Environmental Response, Compensation, and Liability Act (CERCLA). The MOA was authorized by section 315 of the National Defense Authorization Act for Fiscal Year 2015. In 2021, NASA and USEPA entered into an Administrative Agreement and Order on Consent RCRA-03-2021-0022TH (AAOC) for the FUDS Program. The AAOC designated WFF as a Superfund Alternative Approach site.

During cleanup, complex sites may be divided into several distinct areas to make the response more efficient. These areas, called operable units (OU's), may address geographic areas, specific problems, or medium (e.g., groundwater, soil) where a specific action is required. WFF currently has nine OUs. The CDL is designated as OU 7. Below is a summary of the environmental activities at the CDL.

Supplemental Field Investigation, Human Health Risk Addendum and Ecological Risk Assessment Addendum – Fieldwork activities for the Supplemental Field Investigation (SFI) was conducted between May 2015 and November 2017. The purpose of the SFI was to determine if the lower part of the surficial aquifer was contaminated and to refine the extent of the waste material within the AOCs. Fieldwork included trenching, soil, groundwater, sediment, surface water, and pore water samples.

In 2022, NASA completed the SFI, which included a Human Health Risk Assessment (HHRA) and Ecological Risk Assessment (ERA). The HHRA evaluated risks to human health potentially posed by Contaminants of Potential Concern in the affected environmental media beneath and within the vicinity of the Site that cannot be eliminated using screening criteria. The ERA identified Contaminants of Potential Ecological Concern for potential ecological receptors and habitats and potentially complete exposure pathways at the Site.